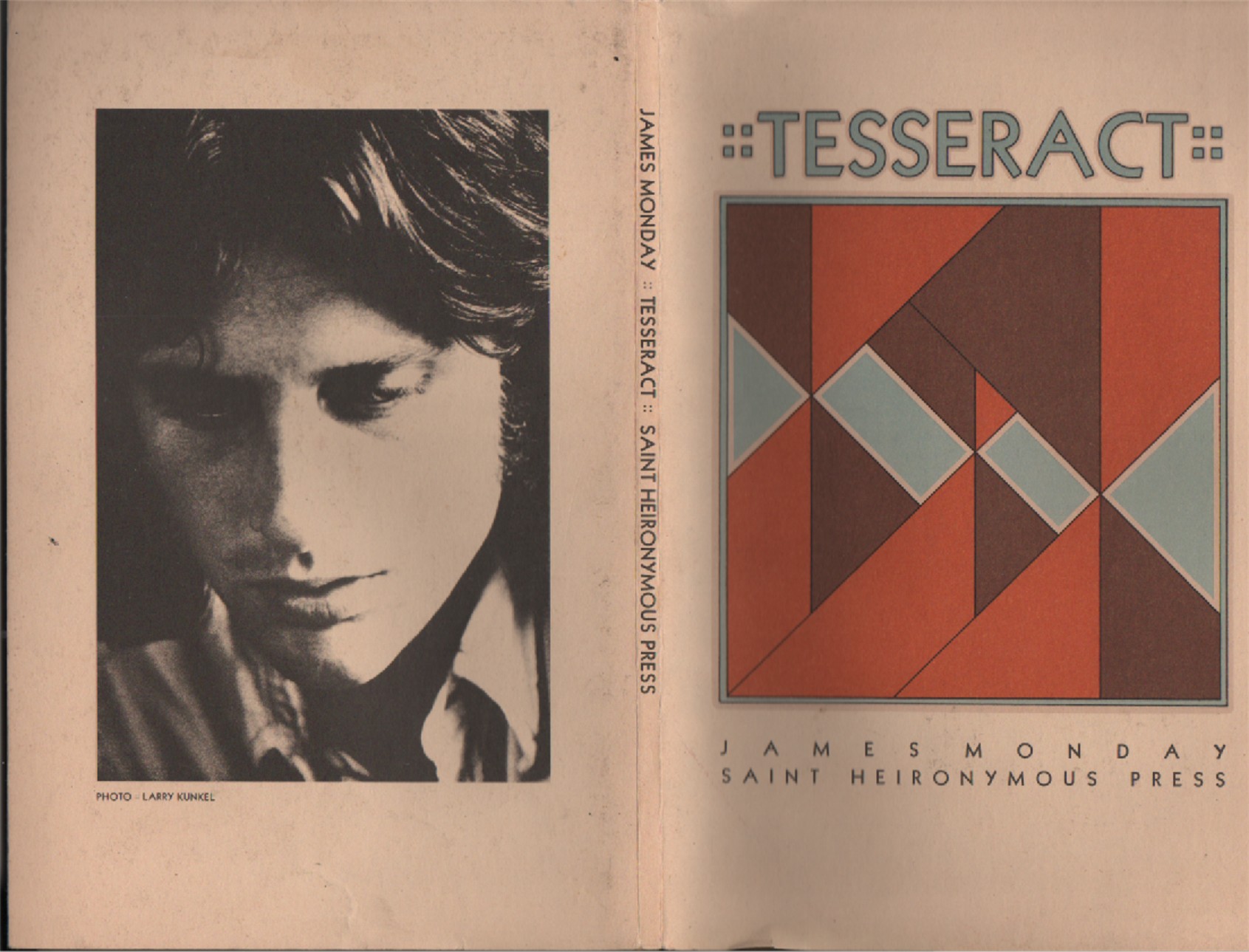 The contrast betwen the portrait of the fallen angel and the geometric pattern on the book cover is stunning. James Monday's averted gaze and surreal luminescence mesmerize the onlooker and entangle the dreamer in Luciferian nets of obscure light.The publisher's name "Saint Heironymous"--a reference to Saint Jerome, translator of the Bible into Latin-- adds a mystical touch to this dark romantic portrait. From this picture one might expect to discover a poet of tragic romances and verbal pyrotechnics whose ambivalent aura captures, engulfs and radiates an apparitional light emanating from another world. This is the light of the passionate lover. This is the love of the daring explorer of linguistic realms. Monday uses the details of the material world as a springboard to the spiritual. His poetry can thus be regarded as a vulgate, a translation of spiritual experiences in their manifestations to the world of ordinary events.

Poetry as a Metaphysical Journey into the Fourth Dimension

A tesseract is a four-dimensional hypercube. James Monday'swordscape is not two-dimensional as would be a poem with a conventional layout. His poetry engulfs the reader in afour-dimensional environment, where the resonances of each word are diffracted and refracted in a verbal prism, so that each linguisticfacet is explored and is allowed to shimmer in all its polyvalent and multiphasic richness. The tesseract is the geometrical icon of the multifacetedness and depth of James Monday's poetry, which carries the reader into a fourth dimension beyond the material world as we know it. The leap to the beyond and the unknown is a daring exploration of uncharted resources of language and a metaphysical challenge waved at this world. The reader sets out on a journey into the fourth dimension to explore the multiple facets of time inall its depth and volume. Monday's poetry opens the doors to a higher realm of existence. This fourth-dimensional hypercube is also a form of metapoetry, since the writer stages himself writing and presents metaphors of his creative process. 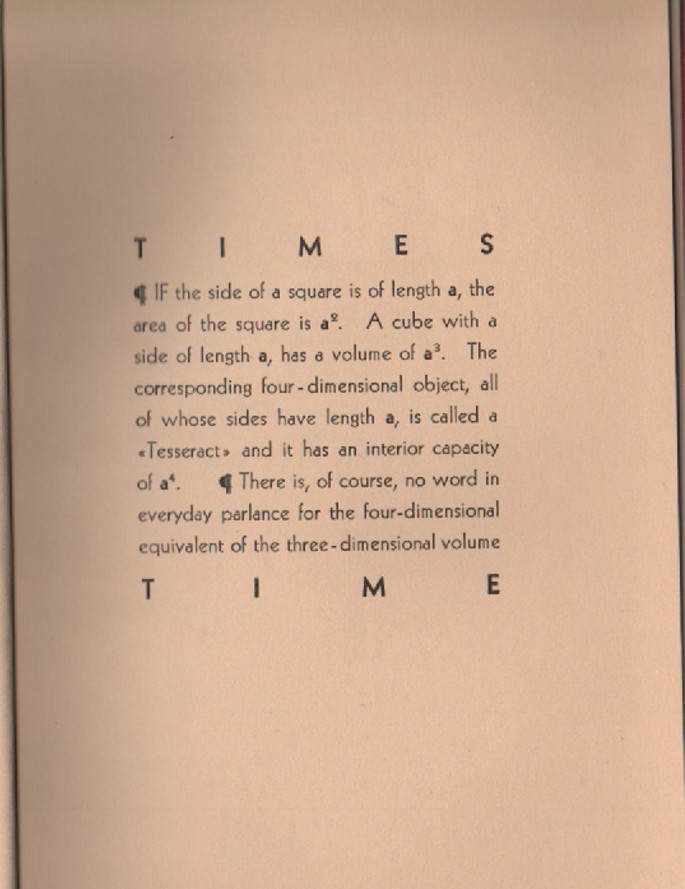 Poetry as a Sexual and Mystical Wordscape: the Iconic Language of Desire

James Monday uses typographical techniques inherited from e. e. cummings to create scattered wordscapes dramatizing love dares and misunderstandings. His lyrical poems are playful and metaphysical experiments with verbo-visual effects that foreground the material qualities of words on the page. The unconventional page layout breaks the traditional flow of language thanks to the profusion of devices provided by a bold use of punctuation marks. James Monday resourcefully explores the iconic relationship between word and image in order to stage his adventurous love affair with language. The poet-lover's puns and neologisms entice us in a maze of letters. The poems enhance the cross-pollination between words and images. The iconicity of the text can be viewed as a form of materialization of content. Some poems are to be read word by word, while others are to be deciphered letter by letter, especially when seed syllables are scattered across the visual landscape of the page. The visual merging of letters into shapes differing from their usual configuration in a dictionary reflects a desire for the obsfucation of the manifest content of the poems. James Monday's poetry gives flesh to polysexuality in a polysemous texture. The desire for obscurity stems from the obscurity of desire. James Monday's wordscapes are not only verbo-visual experiments, not only typographical puns, but also metaphysical incarnations of desire. His desire for the lover cannot be separated from his desire for language. Even if the use of punctuation marks in the poems can at first seem purely erratic, it is the manifestation of a deep erotic urge that the poet struggles to control. James Monday deconstructs common words and reconstructs them into new apparitional figures, thus conciling geometrical constructivism and romantic expressivism. 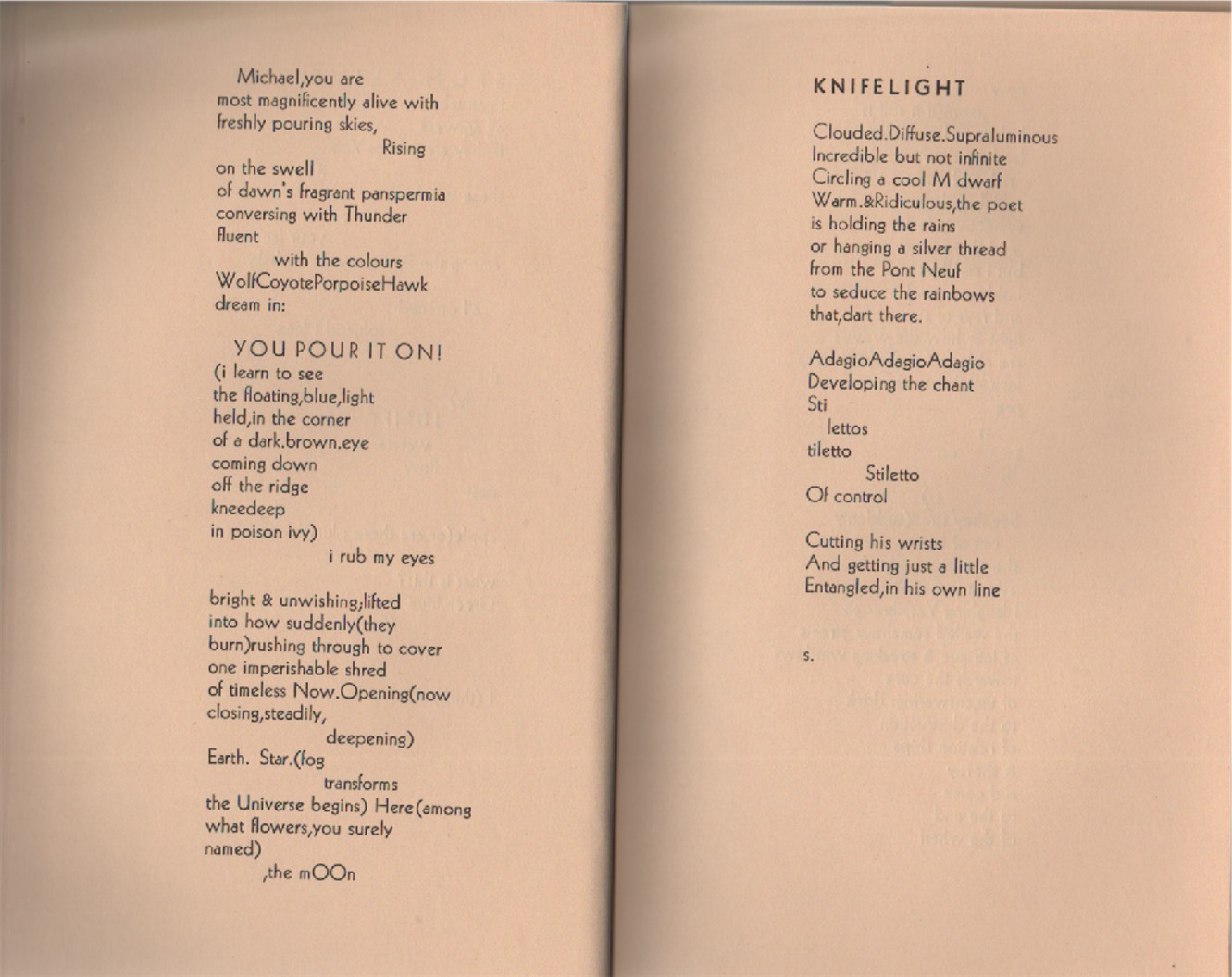 James Monday's mystical love poems of praise and elation stage the pansexual relationship between the poet, the word and the world.They euphorically dramatize the interplay between the sensuous texture of language and the world of the elements. The lover understands the language of elements and holds a shamanic relationship with totemic animals that serve as spiritual guides in a process of initiation that enables the poet to reach a state of oneness with nature. The lover's seminal fluid is the rain of creativity that symbolizes the fruitfulness of his inspiring relationship with the poet. Thanks to the beauty of a lover's body, the poet-lover reaches the metaphysical state of bliss and is led to catch a glimpse of eternity in the present. This mystical poem is akin to William Blake's "Auguries of Innocence":

"To see a World in a Grain of Sand

And a Heaven in a Wild Flower,

Hold Infinity in the palm of your hand

And Eternity in an hour."

The poet stares at the continuous creation of the world in its eternal unfolding that is being manifest in the present moment. The poet's creativity is an intimate participation in the creation of the universe. The unfolding of the poet's verse is a cosmogony, a spontaneous and eternal blooming of the world in front of our very eyes. James Monday's metapoetry is a metaphysical leap off the cliff of sexual arousal up to a spiritual space of mystical union. His poems cross "new thresholds, new anatomies" of desire and visual language.The poet's word-seeds are interpersed across the field of the page, of the mind, of the universe. Panspermia, the cosmic seeds of life, fertlize the world of the poems. The author's sperm (en)genders the cosmogony ofthe poems. Monday's poetry is a multiphasic heterocosm of continual creation in its incipiency. 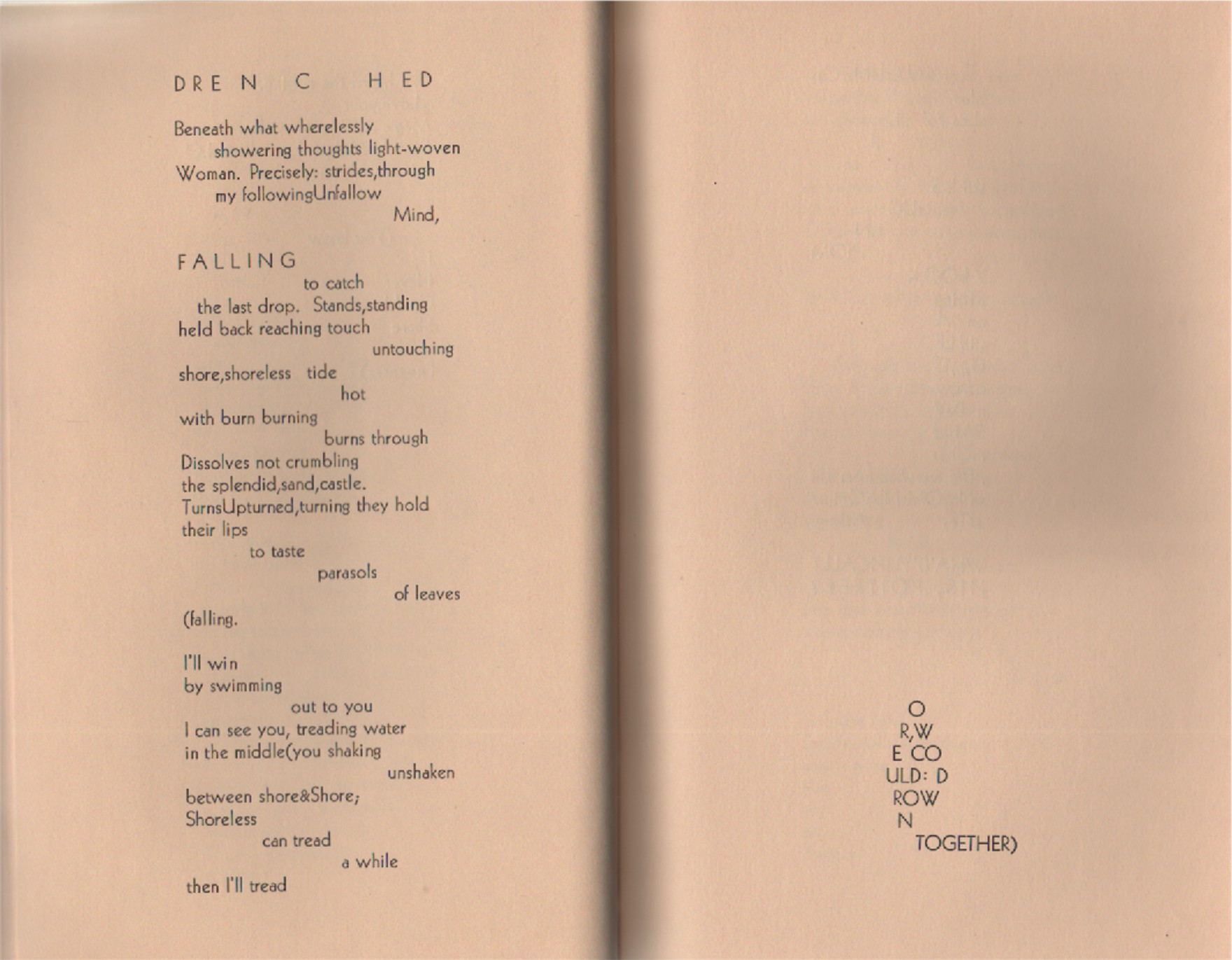 The bedazzled poet can be blinded by the power of the light. The dazed poet is mOOn-eyed. The light of Truth has an edge that can inflict deep wounds. Light rays are sharp-pointed knives. Enlightenment can be "Blindsight", blindness and insight. Like Rimbaud in his Illuminations, the poet hangs threads to the cityscape in homage to human and universal creation:

"I have hung ropes from steeple to steeple; garlands from window to window; golden chains from star to star, and I dance."

The poet's lines are seductive attempts to be admitted into the sublime creative game. The slow pace of music accompanies the love duet between the poet and his environment. The poet dances with words and with natural elements just as he dances with a lover-slowly, gracefully, skillfully. The poet's stylistic feats are daring experiments to amaze the world and seduce the reader in a maze of poetic lines. The poet is like Icarus in his overreaching endeavor to fly above the ground to reach the sublime and in his show of hubris that can make him fall lower than ever in a downfall filled with bathos. This is the cutting edge of dazzling poetry.The poet cuts his lines as he cuts his wrists. The gap between the final "s" and the previous line epitomizes the gash in the poet's wrists. The wound of severance is an agonizing self-sacrifice leading to creation, a little death that enables the poet be fruitful. In order to write his lines, the poet needs to cut his veins so that blood lines gush forth. The stiletto is a small dagger of pain that kills the poet. It is also the pen that inscribes the graphic representation of that pain in the poem. The stiletto is a little stylus, a sharp-pointed instrument used to write graphic figures of desire. The stylus is also a needle that cuts record grooves and makes music audible. The music of the poem is inscribed by the stylus, which is the essential instrument of the graphic art of writing poetry (poiein / graphein). Writing poetry is the graphic art of inscribing desire on a musical score. Even if the poet can fall prey to ridicule because of his sublime failures, even if he can thus become the crowd's laughing-stock, his mystical flights of insight enable him to weave and unweave a song of praise to the universe.

The Errancy of the Word Made Flesh

The juxtaposition of antonyms is the verbal representation of the contradictory and complementary motions of tidal ebb and flow. The music of the poem is based on paronomasia, the use of words similar in sound. The page layout is the verbo-visual icon of the progressing and receding waves of the sea. The wax and wane of the moon, the ebb and flow of the tides, the systole and diastole of the heart are cadences that structure the visual shape of the poem. The errancy of language embodies the errancy of desire. The poet celebrating a new form of love needs to construct a new language that incarnates the metamorphic anatomies of desire. Word-coinages give flesh to the resurrectional practice of mystical love unions. Language, like the phoenix, rises from its ashes. The poet loves words just as he loves his partner--'truly, madly, deeply". Like Leander swimming across the Hellespont to join Hero, the poet inspired by love can accomplish miracles: "Amor Vincit Omnia". Thanks to their mystical union the poet and his lover are endowed with miraculous powers: they can tread on water like Jesus Christ. The poem is the embodiment of a theurgy of language. The poet's miraculous weapous are the magic words of desire made flesh. Like Hart Crane's poetry, James Monday's work enacts a " transmemberment of song". Words are transformed, dismembered, remembered and transfused, so that common language is metamorphosed and resurrects into the lambent mutifacetedness of a textured desire.

Oops, you forgot something.

The words you entered did not match the given text. Please try again.

Start a Free Blog at Webs.com